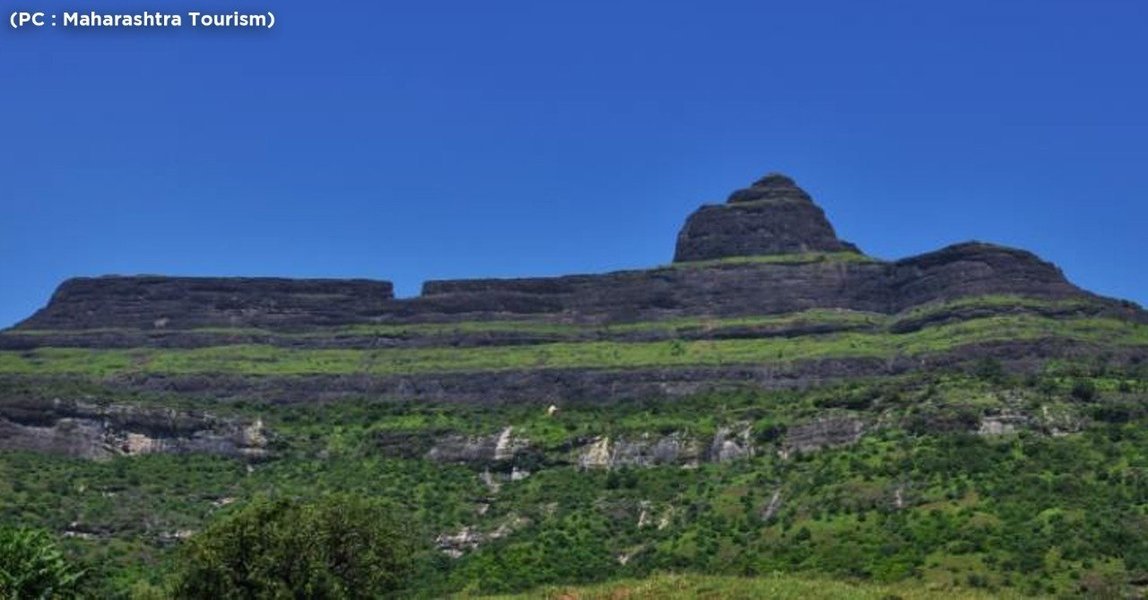 Amidst the maddening crowd in the city we at Trikon take you away to a place which is a paradise on Earth.  About 50km away from Nashik, towards Dhule, there are these beautiful hills which have the Chaturshringi Temple and the Dhodap Fort Which we are going to trek. This fort, at 1472 meters above sea level, is the second highest hill fort in Maharashtra. From the base village of Dhodambe, then passing from Kanherwadi is from where a trek takes you to the fort.

Also did you know Dhodap hill ranks 29th highest peak in Western Ghats!Dhodap has a pointed cliff called Shembi cliff. A beautiful entrance door welcomes you to climb Dhodap Fort. Dressed stone and brickwork these two combinations were used to buildDhodap Fort. Both sides of the Dhodap Fort have strong bastion.Dhodap Fort has many caves and also temples of Lord Hanuman, Lord Shiva and Lord Ganesha. Reaching top of Dhodap involves climbing rock cut stone steps. Climbing up also involves again via bushes and rocks going up leading towards the fort. After around 45 minutes a steep rock patch and wary of rock patches can be seen. The top view is a breathtaking view of the lush green landscape and also the view of the Rawla - Jawla Fort on west face and Ikhara Peak on east face.

Besides Dhodapfort flaunting its wall decked up in greenery, what makes this fort more interesting is the fact that this fort is one of the forts in Maharashtra which had a huge importance during the Peshwa period. RaghobadadaPeshwa hatched a plot against MadhavraoPeshwa here in this fort. When one talks about enormous forts,ChhatrapatiShivajiMaharaj, the great king first comes to mind and hence this will interest you to know that ChhatrapatiShivajiMaharaj had visited this place during the second invasion from Surat presumably for keeping the treasure.

On the fort you will find a tank where there is an idol of Lord Hanuman. One interesting fact about Dhodap fort is that this fort does have a tunnel! The tunnel is around 5m wide. This fort has many caves. The caves can be found at the base. You will also find a temple situated in one of these caves which is in a good condition even today. There other caves too which are big and waiting to be explored.Very interesting domical structure is that of this fort at the lowest part of the fort. If you ever thought of rock climbing you would like to a huge cliff from this fort. The eastern face shows the cliff namedIkhara which is very popular amongst rock climbers.To add one more amusing information about Dhodap Fort is that there is ‘Cow of Stone’ moving inside this hill. On every Vasubara, the villagers hear this cow moving inside by the distance of four grains. What more can grab your interest? Get set Dhodap!