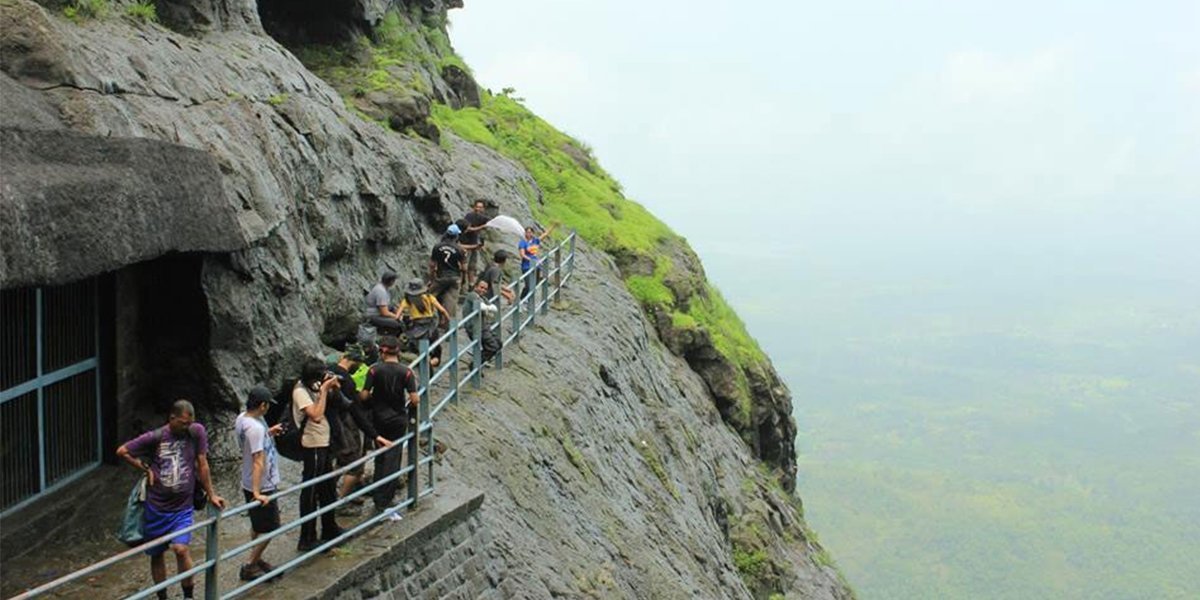 Naneghat Pass (approx 2750 Ft MSL):
This sheer cliff is a well know landmark, very clearly visible from Konkan region as you pass on your way from Kalyan towards Malshej. The walls of this pass jut out from the main range and hence command a magnificent view of the great bend in the Sahyadri. This is a pass, which once in history, enjoyed prime importance. The inscriptions, the steps, the rock-cut rest houses, and the cisterns all point out the historic fact that this route was frequently used as far back as the 1st century B.C. The Naneghat area and the caves are now very popular due to an easy access from Malshej ghat road.

Jivdhan (approx 3750 Ft MSL): (This trek totally depends on Rain)
The fort stands at an important position and most important guard of Naneghat. From here any help to Naneghat could reach in less time. It was under Bahmani control and after that it went to Nizamshah. In 1636, Nizamshahi declined. Shahajiraje rescued Murtiza, the last Nizam from Jivdhan and took with him to the fort of Pemgiri. But he was trapped by Mughals and had to hand him over to them. This was the end of Nizamshahi. In 1818, the British captured all the forts here and destroyed them. Jivdhan too became a victim and the main entrance was destroyed. Even today the marks of those cannot go unnoticed as we climb the fort.

Durg Fort (approx 3900 Ft MSL):
Durg is a small fort with no remnants just a hill with many stones lying atop. At the base of the fort there is a small temple of Ma Durg.

Dhakoba (approx 4100 Ft MSL):
Being the highest point on the plateau Dhakoba offers commanding view of the surrounding. One can spot, Naneghat, Jivdhan, Durg, Ahupe, and Gorakhgad from here. The main thrill is the view of the straight falling cliffs in the Konkan area.

Bhimashankar (approx 3500 Ft MSL):
Bhimashankar is one of the 12 Jyotirlings of India, a pilgrimage place approximately 3500 feet high up in the hills. The area around Bhimashankar is covered with thick dense jungle. The Maharashtra Government has also declared it a Sanctuary. The sanctuary is small (only about 100 sq. km’s), but it is home to a wide variety of animals Leopard, Sambhar, Barking deer, Porcupines, Grey Jungle fowls, Wild pig, Hanuman langur, Rhesus macaque and Flying Squirrel etc. The sanctuary is famous as the home of a highly endangered subspecies of the Indian Giant Squirrel – Shekharu (Ratufa indica elphistoni), which is also the state animal of Maharashtra.

Shiva Temple: The temple of Bhimashankar is around 1200 – 1400 years old and is built on the Hemad Panthi style. There are very beautiful sculptures and paintings on the roof and pillars of the temple. At the front of the temple hangs a huge metal bell cast in 1729. There is also a 15-20 feet high “Deepmala” or lamppost in the outer corridor of the temple. There is also an inscription on stone on this lamppost. It is to be noted that the original name of the river Chandrabhaga at Pandharpur is Bhima. This Bhima River originates at Bhimashankar.

Consuming liquor or any kind of Alcoholic substance is prohibited. Carrying any kind of substance that’s illegal is not allowed. Anybody found consuming alcoholic drinks will be expelled from the event without refund.