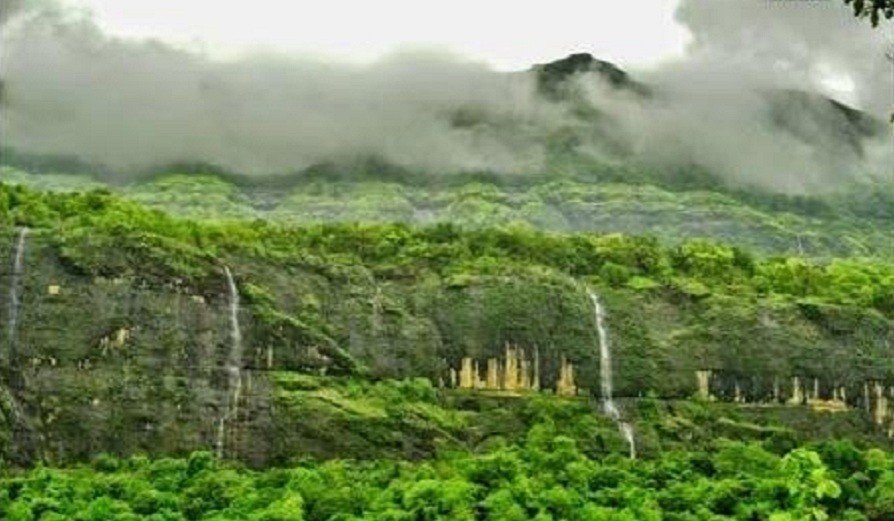 Trekking this fort is quite difficult and needs some experience of trekking and it takes about 3-4 hours to reach the main gate of the fort. The trek up to Wadi is an easy task and the thrilling part of the trek is that the trek goes through the dense jungle of Bhimashankar Wildlife Sanctuary.

When you reach the most awaited moment that is the top of Siddhagad, you will enchanted by the pleasant environment here. Cool and foggy weather will greet you here. At the Balekilla (The top of the fort) you will see a mesmerizing view of the Karnala Fort, Manikgad Fort, Kothaligad Fort and Bhimashankar Fort. You will also spot the Gorakhgad Fort and Machindragad Fort on the left side of the Siddhagad Fort if the weather is clear.

The best time to visit the Siddhagad Fort is during the monsoon and especially the post monsoon season when the lush green carpets of the fort are ready to embrace you. The winter season is the perfect season to visit the fort to experience the beautify fogy atmosphere on the top.

Bhimashankar:
Known as one of the 12 ‘Jyotirlings’ of India, Bhimashankar is a popular place for a pilgrimage in India. Bhimashankar is nestled approximately 3500 feet high up in the hills. Covered in dense and thick forest, Bhimashankar journey is a journey you will always remember for its architecture and artistic significance.

Bhimashankar is also known for the thick dense jungle which is also a sanctuary. It has declared be a sanctuary by the Government of Maharashtra. If you see, the sanctuary, it is little small which is approximately around only about 100 sq. km. Bhimashankar is a home to various varieties of animals such as Barking deer, Porcupines, Grey Jungle fowls, Leopard, Sambhar, Hanuman langur, Rhesus macaque, Wild pig and Flying Squirrel etc. Bhimashankar is also a home to a highly endangered subspecies of the Indian Giant Squirrel – Shekharu (Ratufa indica elphistoni), which is also the state animal of Maharashtra.

Bhimashankar:
To mention about Bhimashankar, a major attraction is the Shiva Temple. This popular temple is approximately 1200 – 1400 years old and is built on the Hemad Panthi style. You will be amazed to witness the painting and the sculptures on the roof and on the pillars of the temple. You will also see a huge metal bell cast in 1729 hanging in the front of the temple. Bhimashankar is a place for all those who love to explore art and are in search of a unique destination.

You will also be surprised to see a 15-20 feet high “Deepmala” or lamppost in the outer corridor of the temple. You will be very fascinated while exploring this place and your eyes will never get bored of the olden art here. At Bhimashankar, you will also find a stone which is very special. The reason for its specialty is that you will find an inscription on the stone on a lamppost. To add more to the information of this highly recommended place is that, the river named Chandrabhaga at Pandharpur have an original name which is ‘Bhima’. This river Bhima is originated at Bhimashankar.

A renowned name in history the Siddhagad Fort is remembered during in the events occurred in the Indian freedom Movement as two fighters Bhai Kotwal and Hiraji Patil were shot dead here by British on 2nd Jan 1943. On a route to Siddhagad you will also find a memorial of those freedom fighters on the opposite side of Narivali Village. Siddhagad means Valour Fort.  Siddhagad Fort is an old hill fort built by Shilahaar Dynasty in the 9th century. The Siddhagad Fort has a huge contribution in history and has highlighted its name in contributing in the Independence war against the British rule 1857-1947.

Meet the Trikon team at Kalyan Station, Platform no 1, at 10.00 pm sharp (Late comers won’t be entertained, as we will be Starting by the 10:30 pm bus)
10:30 pm Start the Bus journey till Murbad, followed by another bus till Uchale Village