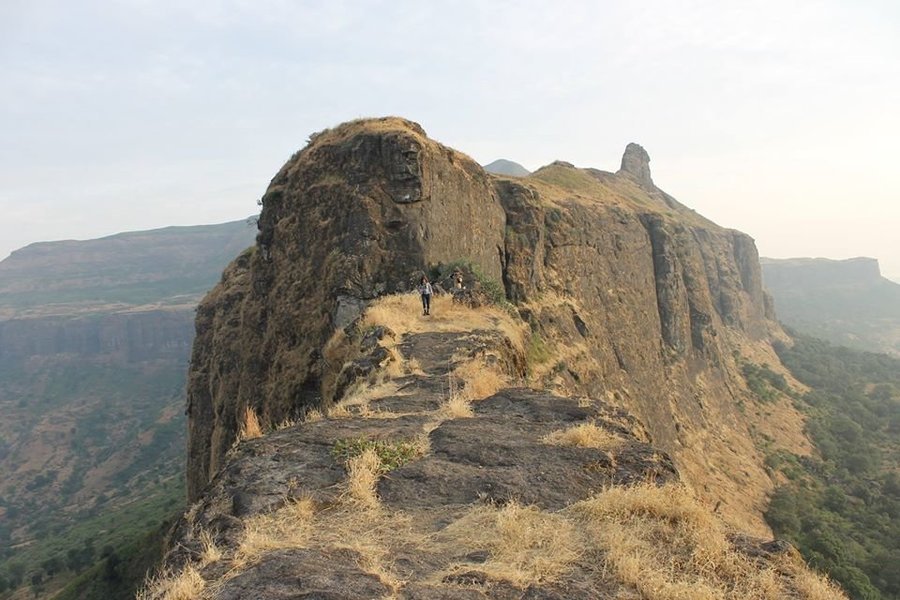 Ancient temples, towering forts, vertical cliffs, soothing greenery and striking water bodies make Brahmagiri a must visit place for trekkers, devotees and nature-enthusiasts alike. Treat yourself to nature walks and trekking amidst the woods and the undulating landscape followed by camping in nature to usher in that perfect weekend you have been waiting for!!

Brahmagiri (Trimbakgad) :
Brahmagiri ( or hill (“giri”) of Lord Brahma) is known for its mythological associations. The hill is mentioned in several ancient scriptures and is believed to be a huge form of Lord Shiva. The Trimbakeshwar temple in Brahmagiri shelters one of the 12 Jyotirlingas of Lord Shiva and is considered a holy place by pilgrims and devotees. The hill is now accessible through stone steps  built during the 20th century. The Godavari, the second longest river in India after the river Ganges, has its source at Trimbakeshwar.

Durg :Bhandar
This is the north-most part of Trimbakgad or Brahmagiri hill and has a rich history behind it. In the year 1752 Trimbak Suryaji Prabhu, the warrior from Peshwa’s camp, wrested the fort and established the Peshwa’s regime there. It was in the year 1818 that the British forces led by Mc Dowell gained supremacy in the region.

05.00 am: Reach the Base Village and freshen up, have breakfast
06.30 am: Post introduction commence trekking to Brahmagiri top
08:30 am: Reach Brahmagiri top, Have Breakfast and Relax sometime
09:30 am: Commence trekking to Bhandar Durg
10:30 am: Reach Durg Bhandar and explore the surroundings
11:30 am: Start descending back to base village
01:30 pm: Reach base village and Have Lunch
03:30 pm: Start Return Journey for Mumbai
10:00 pm: Reach Mumbai (Depending Upon The Traffic)